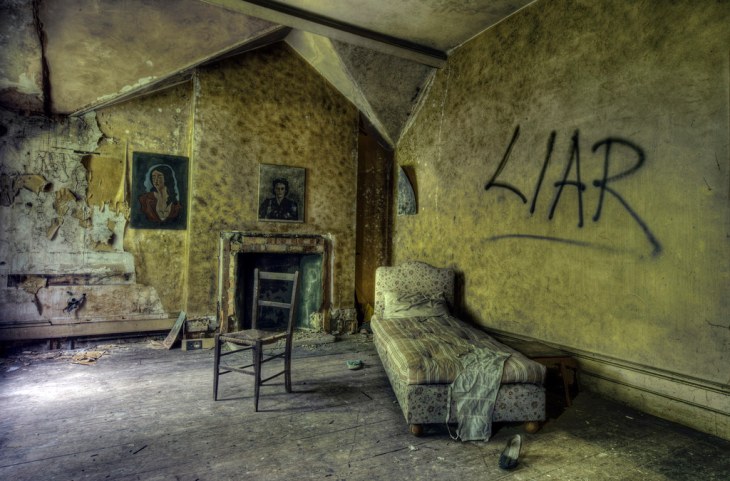 That’s a strange title for a post isn’t it?

Well after several years of having to deal with this I have a theory. It probably will be shot down by any practising psychologist within a three-kilometer radius but here goes…

The problem with downright lying is that it is hard to reproduce. I mean we have all seen those crime series on TV, where the same questions are asked time and time again, sometimes from several angles to try and catch the perpetrator out. Well, there is a reason for this. If you make it up completely – I mean Pinocchio level lying, then it never happened, so how do you actually remember it? It is difficult, and some can do it, even maintaining the framework of several lies.

One trick, which is probably known to several readers is the broadband approach:

“(S)he hit me”. Leaving aside that this happens, and is reprehensible. It is used to gain an advantage in what comes next, be it divorce, or access/custody of the children. The ‘beauty’ of this statement is that it is, apart from the verb, content free. No details of how, when, or even why. If there are no witnesses, then it is one person’s word against the other. But once this genie is out of the bottle the impression remains.

The other is much more devious especially in the context of parental alienation, where young minds are malleable and can be made to believe anything – even things that never happened (gaslighting).

You take a situation, preferably negative, or capable of being made to look negative, and change it using several words as anchors.

I was with my children in Munich city centre. They were probably around 11 & 9 at the time. We passed an information stand from the Scientologists – which are classed as a sect in Germany. I asked my youngest (Raffi) to go and get one of the brochures they were handing out with the aim of showing both of them what to be aware of – i.e. the words associated with Scientology (Dianetics, L. Ron Hubbard etc.)

So I was looking through this brochure with the aim of showing them the words to watch out for and Raffi sees a man on the pavement begging for money. “He needs money so he can go to the next drug shop.” A rather strange statement, though if that is the mother’s way of educating the children about the danger posed by drug usage, I’ll support it,  after all, we have the same aim – keeping our children from harm. I agreed, saying “Yes, the drug shop or buy some alcohol.” Then it came – and I will never forget this. “You threw up on the sofa once Daddy.” I was quite shocked and denied it of course because it never happened. But in the believability stakes, I was obviously trumped by the mother, and come to think of it probably any stranger walking by. So to this day my boys believe I am a drinker that didn’t even manage to make it to the loo when he had drunk too much.

So long story, here’s the analysis: Take the words – drunk, sofa and threw-up.

So full disclosure – there was an incidence when I got home early in the morning. I was quite tipsy,  probably drunk and I did throw up. So it’s true I hear you say. Nope!

Sofa – I arrived home at 6 am, and naturally did not want to wake my then fiancee. I was out with a lot of friends, including Derek, where I was going to stay the night. But he bailed early in the evening.

Threw-Up – Yes I had a lot to drink, and I did talk to God on the great white telephone, but in the afternoon the day after, and as I had sobered up by then I knew what was going to happen so I managed to make the toilet.

Drink – Yes I had a lot to drink, but this was in August 1999, three years before my eldest son was born. I enjoy a pint with friends every now and then, I mean, after all, I am British. But not with the aim of getting plastered every time – But this one time was acceptable, and allowed.

Putting the pieces together: If I say I got married in early August 1999 you will probably realise that we are talking about an age-old ritual that is celebrated by several nations, and sometimes quite excessively celebrated – It was my stag night!

So in this case with three little anchor words, you can maintain the lie.

Based on the framework, which in my case was “Brits drink too much, your father is British, Drinking is bad, therefore your Father is bad.” which was obviously taught to my children from the Go and you have a ‘believable’ sofa-abusing story for an 11 and 9-year-old, which reinforces the already seeded lie.

Up till this moment, I always wondered why Raffi said: “Don’t get drunk Daddy” to me from his bed on several occasions when they were still stopping over with me.