In the first half of 2010 nothing really serious happened. Interestingly enough we both petitioned for divorce on the same day! Her petition arriving a few hours before mine, so she “won”! it went on to take a year to finalise due to sorting out the one mandatory item in a German divorce – no not custody of the children as one would expect – but pension rights.

She proved to be a lot sneakier than last summer. But again – anything to stop the children staying with me for more than a couple of days.

In the meantime we had had several e-mails and telephone calls. All with various levels of disagreement. See the 24-hour rule. One call that I still remember is where she got upset about something. Still trying to forward her agenda that the boys are OK where they are and I should just visit for tea in Eichstätt every now and then. But then she said something so silly that I remembered it – “You will never get the boys”. Now I never had indicated that I wanted the “Aufenthaltbestimmungsrecht“, which in Germany is the part of custody that gives one parent the right to determine the place of abode of the children while retaining joint custody for all other matters. But she was insistent and really believed that this was my eventual aim. Obviously the fact that I had a girlfriend with two boys and a potential place for my boys to live had kicked off fantasies.

Even bringing them back home was OK. I had a car at this time and brought them back directly. By this time the stupid idea with the car park had been dumped and I brought them home, and as I left Jonathan used to follow me on his bike waving … happy memories.

Then just before summer holidays I got a registered mail from my still wife with just a couple of  lines: 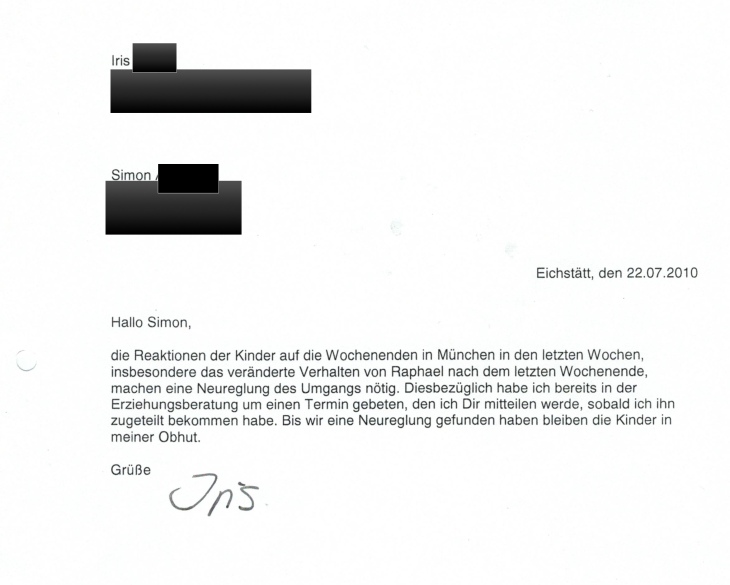 In it she refers to a change in Raphael’s behaviour without mentioning it, and that until further notice the children will stay with her.

No reason why. She says she will make an appointment with social services, but when I rang there was no communication from her.  And the earliest appoint due to the summer holidays was in fact September!

I tried to get in touch, but she seeing all communication went through her boyfriend I never got through. With no way of contacting her I asked my lawyer to contact her lawyer, and suprise suprise I received ld-werwigk-mandat letter. Saying that she was no longer my wife’s lawyer. Interestingly enough the letter was passed on directly to my wife, who by then had found another lawyer – her neighbour – and nothing happened.

So to sum up – there was no way of contacting my soon to be ex-wife at all. Without physically going there and causing a scene. Which I was not going to do.

I was completely shocked that she could do this, but she did, and it worked. The timing was perfect. And no details given accept a wishy-washy reason for one child, not both of them

Interestingly enough the house was in the process of being sold, and at the end of August we had an appointment at the notary to finalise the sale. So she had to be there.

She did actually turn up at the appointment, ignoring calls from my lawyer to her new lawyer to confirm, just to keep me quite nervous. Interesting enough the new lawyer refused to talk about seeing the children. Stopping the sale going through would have led to my bankruptcy within months, due to the fact that I was paying rent on my half of the house and the entire mortgage on our previous house as well.

We met, concluded the deal and talked in front of the notaries office, sitting on the pavement. He even came past us and offered us his office.

Not once did she explain to me or to social services later what the reason was. But after a while acquiesced to letting the children come next week, but Jonathan had to ring her after a couple of days to confirm if they wanted to stay. I agreed. We talked for over an hour, and it was clear afterwards that it was just hot air on her part. Again, she did not elaborate on what I was supposed to have done wrong. The only way I was ‘allowed’ to see my children was on her terms. Additionally my attempts to convince her to coordinate in some small way birthday and Christmas presents fell on deaf ears. In retrospect this is of course what she did not want – she wanted me out of the children’s lives.

We walked to Karlplatz and then just to show how much in command of the situation she was, she turned to me and pulled a stray hair growing out of my earlobe. She knew she had me, where she wanted me, and could do anything with me. She was until an hour recently in charge of my entire financial future, and also my emotional future (i.e. the children).

When I picked up the children the week afterwards, and of course I tried to find out what the problem was. I was shocked.

Apparently I told my oldest son not to talk to Martin, and my youngest not to hug his mother!

And my youngest (six at the time) somehow believed that he said this!

All I know is that I did not say it, and never would have said something as stupid and unenforceable as that. Even though I recently read something along the same lines happened. Children are malleable at this age, and as I have experienced what they even what they have experienced can be ‘rewritten’ a concept called gaslighting – absolutely disgusting.

The kids were enjoying their ‘holiday’ with me. There was no time or money to do anything complex, but we did lots together, sometimes with, and sometimes without Patrick. In the middle of all this I forgot to remember Jonathan to call his mother on the Tuesday. Why he had to ring became apparent as he asked me a few days later what day it was on the way back from the playground. As I told him it was Thursday he broke down in tears and ran away. When I eventually calmed him down, he told me that his mother had told him he must ring her on Tuesday.

This was the first time I remember the children being manipulated directly by the mother. Based on future actions of the children and wanting to go home earlier I am in no doubt that that call would have led to a forced “We want to go back home”. In the end they had a wonderful week with me, and all of us enjoyed it.

To the outside world, she gave the impression that something was wrong and she was willing to work to sort it out! The truth was something else.

What can one do to stop this – nothing!  Just keep notes. To the outside world at the time the change in lawyer could easily be explained away in that she was in Stuttgart and the new lawyer was her neighbour. She showed willing with wanting to make an appointment to sort out the apparent problem, but there was no way a solution could be found with them before the end of the holidays. And finally she let me have the kids for the best part of a week instead of half the holidays as was planned, and tried to insert a mechanism to cut short the few days she ‘allowed’ me. But in the cold light of what has developed since then it is her actions were more  transparent than the window I am now looking out of.

These are the tricks to be used when you do not want to be direct and obvious and stop all contact immediately without reason. Clever evil tricks to give you the time to alienate the children slowly, and before too long it is too late.

At this time I had not taken her to court to enforce or officially have the visiting rights recorded.